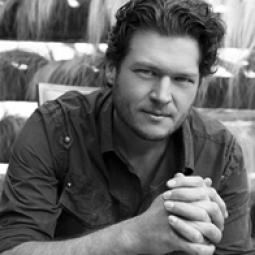 Blake Shelton brought a fun group of his friends to the annual Music City Jam March 2nd in Nashville.
Among those joining him on stage were country acts Chris Young, Brett Eldredge, Frankie Ballard, Laura Bell Bundy, Andy Davis and The Band Perry.

The annual Music City Jam is one of Country Radio Seminar's premier events and has showcased some of the biggest stars in country music, including performances by Taylor Swift at CRS 2010, Tim McGraw (2009), Brad Paisley (2008), Toby Keith (2007) and Keith Urban (2006).

"Blake Shelton is unquestionably one of the hottest artists in country music today," says CRB President Mike Culotta. "His trademark sense of humor and string of No. 1 hits have endeared him not only to his fans, but country radio as well. I can't think of a better fit for this year's Jam."

The Academy of Country Music sponsored the Music City Jam, now in its sixth year at CRS.

"The Academy is thrilled to continue our long-standing partnership with CRB, to host the Jam and bring talented artists directly to country radio," said Bob Romeo, CEO of the Academy of Country Music. "With Blake there is never a dull moment!"

Shelton is having one of the best years of his career in 2010, releasing two SIX PAK albums, Hillbilly Bone and All About Tonight, as well as receiving a flood of honors and awards. Both SIX PAK title-track singles, "Hillbilly Bone" (recorded with Trace Adkins) and "All About Tonight," went to No. 1. All About Tonight debuted at No. 1 on the SoundScan Top Country Albums chart and No. 6 on Billboard's Top 200 chart, making it his highest charting record to date. Shelton is the only solo male Country artist to earn more than one chart-topper so far this year on Billboard's Hot Country Songs chart.

In 2010, Shelton won ACM, CMT and CMA awards, and he is nominated for Top Male Vocalist at the 46th Academy of Country Music Awards, set for Sunday, April 3rd in Las Vegas. He will also co-host the ACM Awards this year with Reba McEntire.