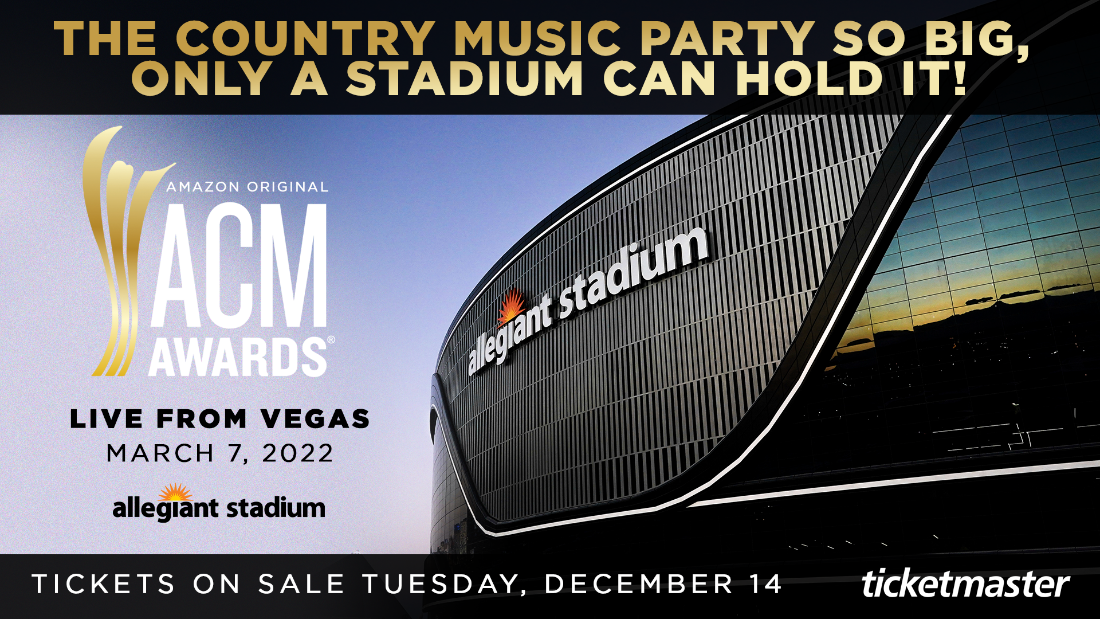 The 57th Academy of Country Music Awards will take place Monday, March 7, 2022, at Allegiant Stadium in Las Vegas and will stream live on Prime Video in the U.S., Canada, Australia, New Zealand, and the UK, marking the first time a major awards show has livestreamed exclusively.

“We are thrilled to welcome back a live audience as we prepare to bring Country Music’s Party of the Year to Allegiant Stadium,” said Damon Whiteside, CEO of the Academy of Country Music. “We look forward to seeing the stadium filled with tens of thousands of country music fans celebrating and joining in on the biggest party yet to come!”

Media credential applications to cover the Awards in Las Vegas will become available in early February, details to be posted at www.ACMcountry.com.

ACM and MRC production is taking all safety precautions by working with state/local health officials and top experts in the field to ensure the safety of everyone involved in the show, including artists, staff, crew and anyone engaging with our show. We are in compliance with and following local government & guilds’ guidelines and safety protocols. All attendees are required to be fully vaccinated against COVID-19 to attend this event. All attendees must show proof of full vaccination. Vaccine verification will likely be conducted through mobile phone apps and/or in-person screening process prior to the start of the event, with such details to be determined closer to the date of the event.

Founded in Southern California in 1964 as a regional trade organization, the ACADEMY OF COUNTRY MUSIC (ACM) has grown in the almost-60 years since into a leading association for the country music industry. Today, the Academy boasts more than 4,550 professional members nationwide and serves as a powerhouse advocate for Country fans, artists, and all facets of the business, as well as a supporter of philanthropic work through charitable arm ACM LIFTING LIVES, which works to improve lives through the power of music.

Located adjacent to the world-famous Las Vegas Strip, Allegiant Stadium is a global events destination, highlighted by the arrival of the NFL's iconic Raiders in 2020. Allegiant Stadium, which won “Best Venue” honors at the 2020 World Football Summit Industry Awards, is ideally located for both visitors and locals, fully enclosed and climate-controlled with a capacity of 65,000. The technologically advanced stadium will host world-class entertainment including concerts and sporting events such as the Pac-12 Championship Game, Las Vegas Bowl, and Concacaf Gold Cup Final, and serves as the home of UNLV Football. The stadium project is expected to generate an economic benefit of $620 million annually while creating 6,000 jobs in Southern Nevada. For more information on Allegiant Stadium, visit www.allegiantstadium.com.

●            Prime Video Channels: Prime members can add channels like Paramount+, BET+, EPIX, Noggin, NBA League Pass, MLB.TV, STARZ, and SHOWTIME—no extra apps to download, and no cable required. Only pay for the ones you want, and cancel anytime.  View the full list of channels available at amazon.com/channels.

●            Instant access: Watch at home or on the go with your choice of hundreds of compatible devices. Stream from the web or using the Prime Video app on your smartphone, tablet, set-top box, game console, or select smart TV.

●            Enhanced experiences: Make the most of every viewing with 4K Ultra HD- and High Dynamic Range (HDR)-compatible content. Go behind the scenes of your favorite movies and TV shows with exclusive X-Ray access, powered by IMDb. Save it for later with select mobile downloads for offline viewing.

Prime Video is just one of many shopping and entertainment benefits included with a Prime membership, along with fast, free shipping on millions of Prime-eligible items at Amazon.com, unlimited photo storage, exclusive deals and discounts, and access to ad-free music and Kindle ebooks. To sign up or start a 30-day free trial of Prime, visit: amazon.com/prime.

The Academy of Country Music