THE ACADEMY OF COUNTRY MUSIC® ANNOUNCES SUMMER 2021 ISSUE OF ACM TEMPO® QUARTERLY MAGAZINE AVAILABLE HERE ISSUE FEATURES AN INTERVIEW WITH ACM ENTERTAINER OF THE YEAR LUKE BRYAN, A RECAP OF THE 56TH ACM AWARDS AND MORE

ISSUE FEATURES AN INTERVIEW WITH ACM ENTERTAINER OF THE YEAR

LUKE BRYAN, A RECAP OF THE 56TH ACM AWARDS AND MORE 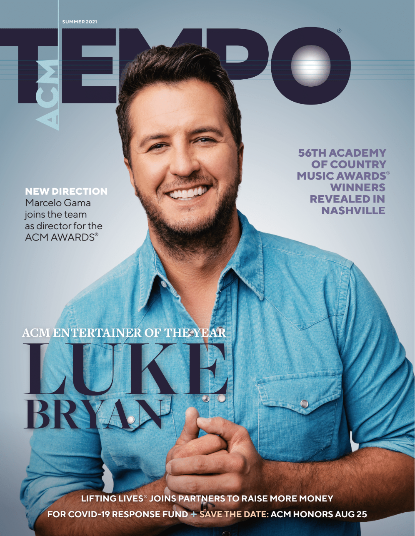 Tweet: Relive your favorite moments and uncover stories from the 56th ACM Awards NOW with ACM Tempo. Access the latest edition of the @ACMawards magazine featuring @LukeBryanOnline and more by subscribing to the ACM A-List

LOS ANGELES, CA (June 22, 2021) – The Academy of Country Music® announced today the summer edition of its quarterly magazine issue, ACM Tempo®, is available now to fans who subscribe to the FREE ACM A-List Newsletter. The Summer 2021 issue of ACM Tempo® features an exclusive interview with reigning ACM Entertainer of the Year Luke Bryan, a feature on first-time ACM Awards Director Marcelo Gama, a recap of the 56th ACM Awards and more. Select articles will also be available to view on ACM: The HUB®. If you missed the 56th Academy of Country Music Awards™ broadcast, it is available to stream on Paramount+.

ACM Tempo® is the Academy’s quarterly magazine issue, serving as an industry resource to recap the Academy’s hottest news, introduce new members, highlight ACM Lifting Lives’ charitable contributions and more. Anyone interested in receiving the full edition of ACM Tempo® can do so by signing up for free to the ACM A-List.

Articles featured in the Summer 2021 issue are listed below:

The full ACM Tempo Summer 2021 edition can be found here.

For more information visit www.ACMcountry.com or TheHUB.ACMcountry.com. You can also like Academy of Country Music on Facebook, follow the Academy on Twitter, Instagram, and TikTok, all at @ACMawards, and sign up for the FREE ACM A-List for the latest news and updates in your email inbox. For information on ACM Lifting Lives, please visit www.acmliftinglives.org.

About the Academy of Country Music®
Founded in Southern California in 1964, the ACADEMY OF COUNTRY MUSIC® (ACM®) is a fan-focused artist and industry-driven organization, providing the financial resources to ensure the on-going philanthropic work of ACM LIFTING LIVES®, the charitable arm of the Academy, which works to improve lives through the power of music. The Academy has a rich history in the entertainment industry, having been founded when Southern California was a hotbed of emerging country music and when Westerns were a staple of television programing and film production. Comprised of more than 4,550 professional members nationwide, the ACM is headquartered in Encino, Calif. For more information, log onto www.ACMcountry.com or www.ACMLiftingLives.org.