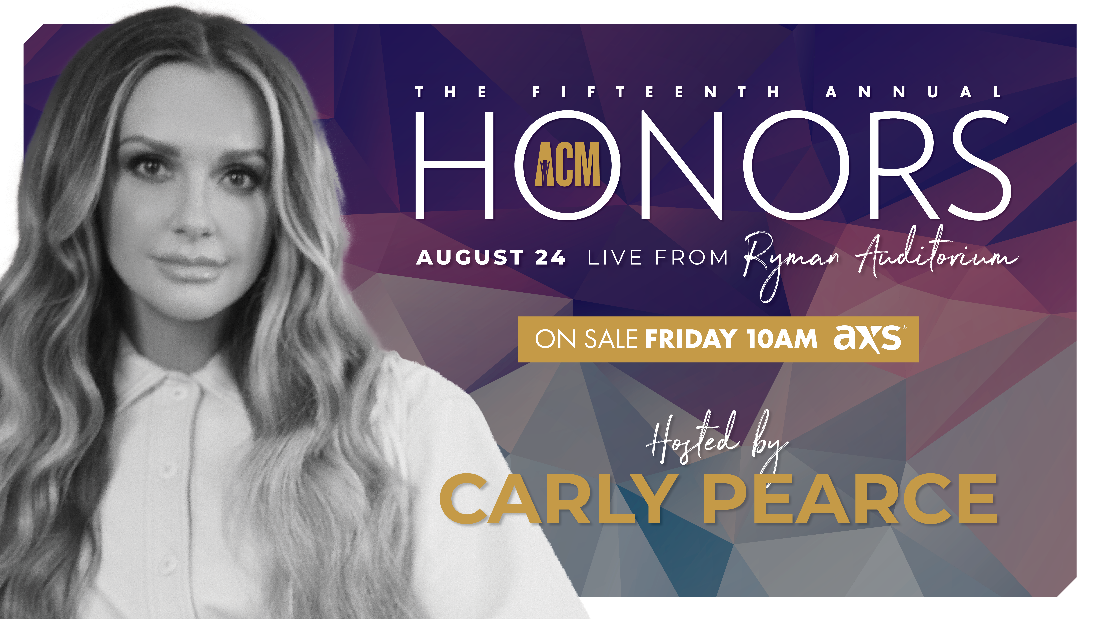 NASHVILLE, TN (June 22, 2022) – The Academy of Country Music® announced today that reigning ACM Female Artist of the Year and four-time ACM Award-winner Carly Pearce will return for a second year to host the 15TH ANNUAL ACADEMY OF COUNTRY MUSIC HONORS™, frequently described as the “Country Music Industry’s favorite night.” The unforgettable evening of live music and tributes will take place Wednesday, August 24, 2022 at the historic Ryman Auditorium in Nashville, TN. Tickets for ACM HONORS™ will be available to A-List subscribers and Academy members through an exclusive pre-sale beginning Thursday, June 23, with general on-sale beginning Friday, June 24 through AXS. City National Bank is the presenting partner of the evening. A full lineup of tribute performers will be announced in the coming weeks.

“ACM Honors is shaping up to be an unforgettable night, honoring some of the biggest names and achievements in Country Music, all while also shining a spotlight on the Studio Recording musicians and Industry professionals that make the music scene in Nashville and around the world possible,” said Academy of Country Music CEO Damon Whiteside. “We’re so excited to have Carly back to host ACM Honors for her second year in a row, making the 15th anniversary of this event even more special with our reigning ACM Female Artist of the Year steering the show.”

“ACM Honors is one of my most favorite events of the year,” said Pearce. “It is a privilege to once again host this special night and celebrate those who are making a profound impact on Country Music.”

ACM PROFESSIONAL MEMBER TICKET PRE-SALE: ACM Professional Members can purchase tickets in a special pre-sale beginning at 10 AM CST on Thursday, June 23, 2022 by visiting AXS. The pre-sale code will be emailed to all Professional Members prior to the on-sale date. Sign-up free HERE for ACM A-List emails for pre-sale access.

For more information, visit ACMcountry.com. You can also like Academy of Country Music on Facebook, follow the Academy on Twitter, Instagram, and TikTok, all at @ACMawards, and sign up for the FREE ACM A-List for the latest news and updates in your email inbox. For information on ACM Lifting Lives, please visit www.acmliftinglives.org.

***For media interested in covering ACM Honors, please fill out this form.***

Founded in Southern California in 1964 as a regional trade organization, the ACADEMY OF COUNTRY MUSIC (ACM) has grown in the almost-60 years since into a leading association for the Country Music industry. Today, the Academy boasts more than 4,600 professional members nationwide and serves as a powerhouse advocate for Country fans, artists, and all facets of the business, as well as a supporter of philanthropic work through charitable arm ACM LIFTING LIVES®, which harnesses the power of the Country Music community and partners to provide aid in times of need, with a focus on health-related initiatives. 2022 continues to be a landmark year for the Academy, with the relocation of the organization’s headquarters to Nashville after decades in Los Angeles, and, in a historic partnership with Amazon, its iconic Academy of Country Music Awards™ streamed live on Prime Video in 235 territories all over the globe, the first time a major awards show has streamed exclusively. For more information, log onto www.ACMcountry.com or www.ACMLiftingLives.org.