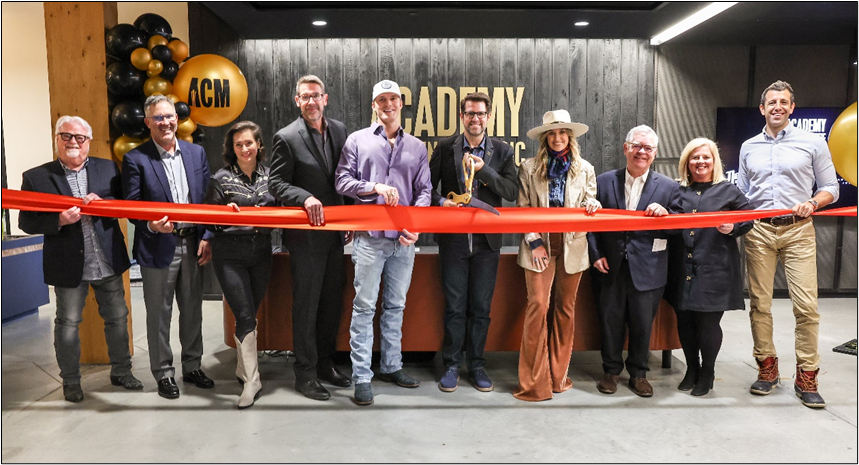 “I am thrilled to welcome the Academy of Country Music to their new home in Nashville. What better place for the Academy to put down their roots than the capital of Country Music itself,” said Nashville Mayor John Cooper. “I’m grateful to ACM CEO Damon Whiteside and the ACM Board of Directors for their commitment to Nashville and for bringing yet another outstanding cultural institution to our great city.” 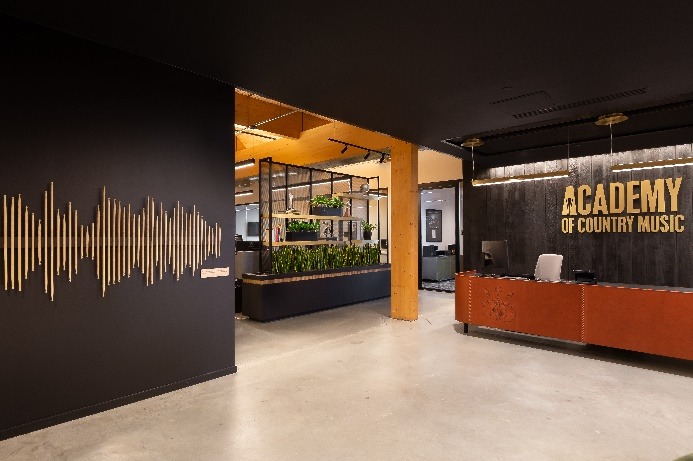 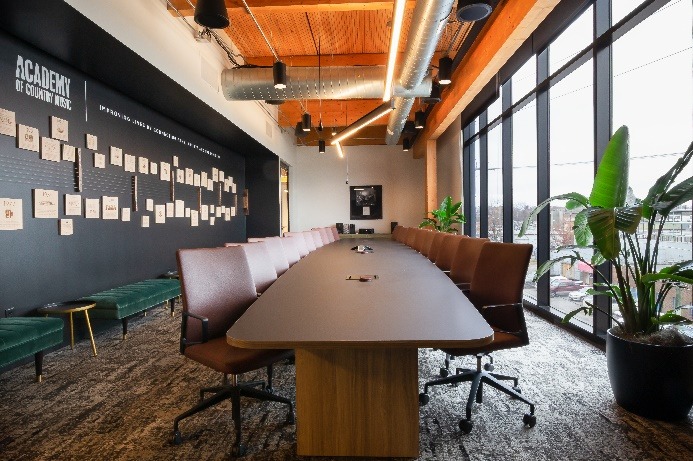 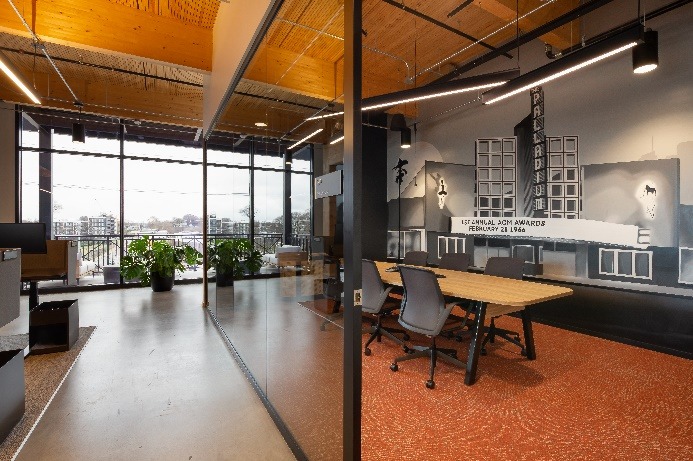 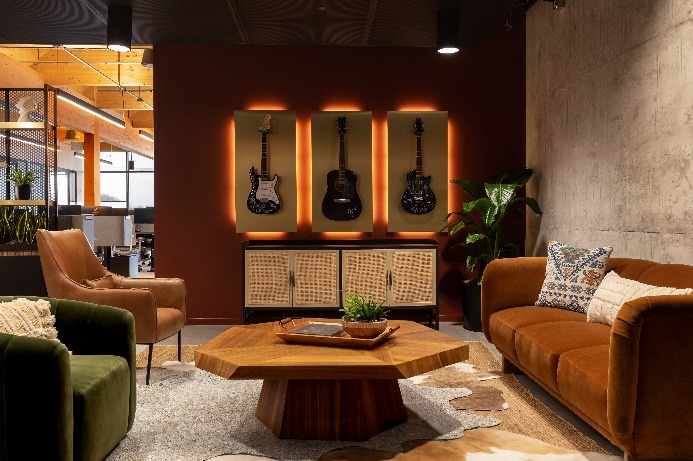 (The Academy of Country Music headquarters is located in the Nashville Warehouse Co. complex in Wedgewood Houston. Clockwise from top-left: The lobby features an art installation visualizing Dick Clark’s send-off at the end of a historic ACM Awards telecast represented as a soundwave of drumsticks; the Aces Club conference room celebrates the home of the Academy’s first Board meeting in 1965 and features a full-wall timeline of major Academy milestones, mapped against guitar strings and frets; the lobby reception area showcases guitars signed by numerous artists and ACM Award winners; the Palladium conference room features a full-wall mural of the Hollywood Palladium theater, home of the first annual ACM Awards in 1966, painted by Nashville artist Eric 'MOBE' Bass. Images courtesy ACM, photographer: Digital Love. Available in full resolution HERE.)

The Academy’s new headquarters is located in the new Nashville Warehouse Co. Building, giving the celebrated Country Music organization a Music City home after almost six decades in California. The office features abundant workstations and meeting rooms decorated with custom art installations showcasing the storied brand’s unparalleled and rich heritage in the front row of Country Music history and featuring major milestones and iconic moments from the 1960s to now, including the very first Board of Directors meeting in 1965 to the first official ACM Awards show at the Hollywood Palladium in 1966. The headquarters were designed with the celebrated organization’s established brand of being an innovative, progressive renegade in mind, as well as to offer an open-door environment to Academy members, Board of Director leaders, and other industry professionals from all around the globe, creating an instant hub for the Country community as the vibrant city continues to grow. 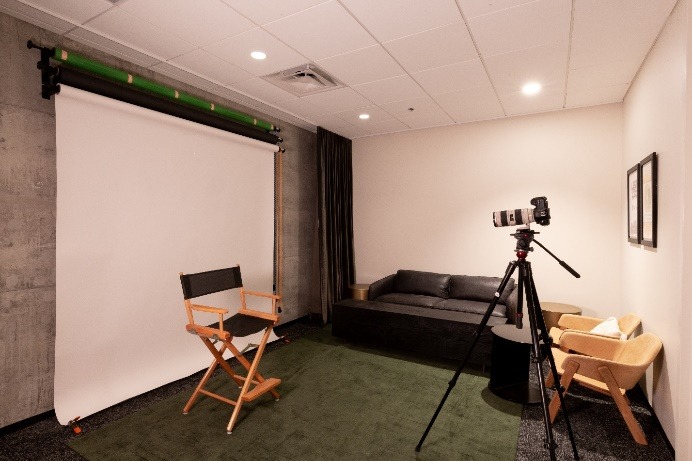 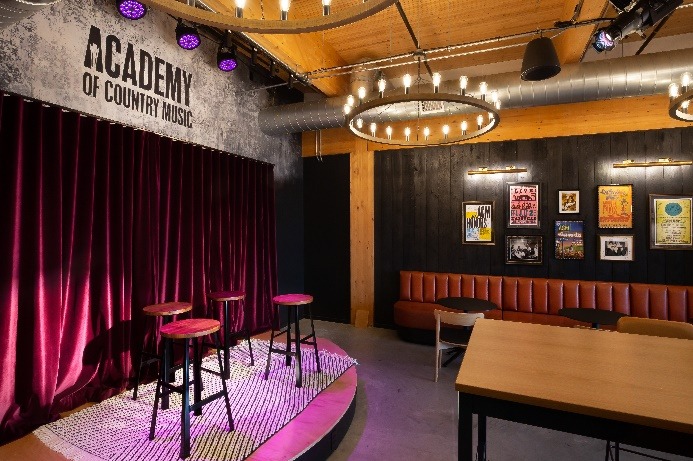 The space features a state-of-the-art content studio for capturing original media with artists, songwriters, producers, and industry professionals, dedicated posthumously to honor Lisa Lee, a beloved longtime Academy staffer and passionate Country Music champion who passed away in 2021. Also featured is a full performance stage and event lounge to host and showcase established and emerging artists from across the musical landscape, paying homage to the Academy’s first unofficial Awards banquet at the Red Barrel club in Southern California in 1964. The space is filled with powerful memories and thoughtful storytelling, from wall to wall.

“This award show captured my attention as a really small kid watching on television. My sister and I would sit on the ground in front of the TV and watch, not that she probably thought that I would ever be up there on that stage or be here today, but it was certainly in my mind,” reigning ACM New Male Artist of the Year winner Parker McCollum said with the Academy of Country Music’s logo on the wall behind him. “So just to even have that behind me right now, speaking about something like this as an award winner, it’s just crazy. Not something I take for granted, certainly.”

“What an unforgettable year it was for both me and the Academy. I won my first three ACM Awards this year, performed on the show, and I did it all in a football stadium and streaming live all over the world on Amazon Prime Video,” reigning ACM New Female Artist of the Year and reigning ACM Song of the Year winner Lainey Wilson said. “I am just so happy to be here to help welcome the Academy as they open this spectacular new headquarters here in Music City. To have the Academy here in Nashville just makes a whole lot of sense.”

“This music is an amazingly grounded and yet always-evolving tradition, and there is real heart-moving power in that, enough to fuel an entire industry that the Academy is honored to represent,” ACM Board of Directors Chair Chuck Aly said of Country Music.

“Speaking for the Nashville Convention Visitors Bureau, thank you for choosing Nashville. We couldn’t be more pleased to add the Academy of Country Music to the fabric of this city,” said Deana Ivey, President of the Nashville Conventions and Visitors Corp. “It is so important for you all to be here, to be part of Music City, and thank you again for choosing us. It adds to our brand.” 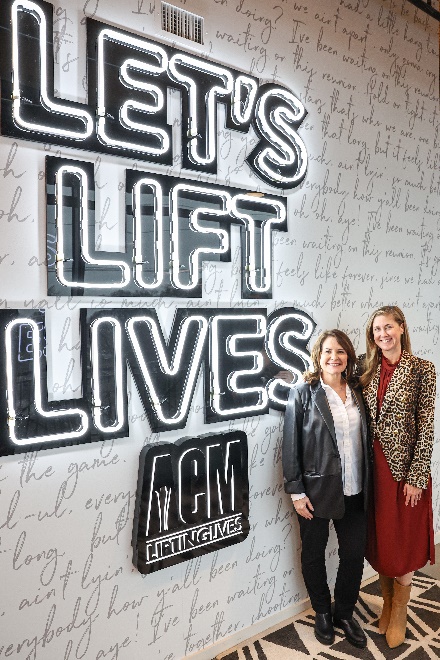 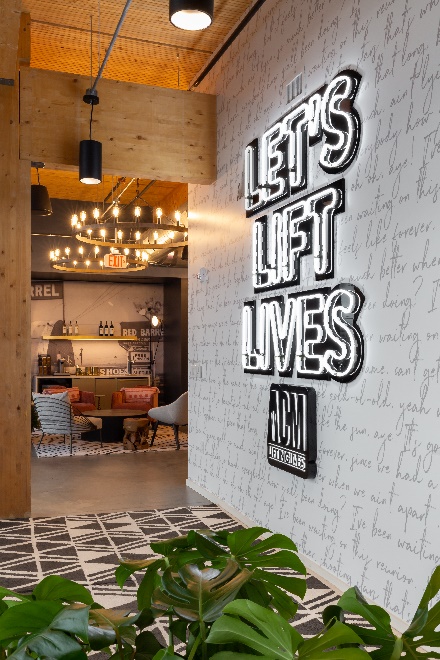 The office also serves as the Nashville HQ for ACM Lifting Lives, the philanthropic partner of the Academy of Country Music, dedicated to improving lives through the power of music. The organization harnesses the strength of the Country Music community to provide aid in times of need, with a focus on health-related initiatives. Their work is celebrated in the space with a prominent wall featuring the ACM Lifting Lives rallying cry, “Let’s Lift Lives,” spelled out in bright neon and set against a custom wallpaper featuring the lyrics to an original song written this summer at ACM Lifting Lives Music Camp, an annual tentpole for the organization that brings individuals with Williams syndrome, a genetic condition, who are passionate about music, to Nashville for a week of special activities.

The new ACM headquarters was designed by Hastings Architects with the goal of embracing the Country Western and Hollywood vibes from across the Academy's history and translating it to a look and feel that reflects modern Music City. The Academy's Design Director Lori Kraft led the creative development of the art installations and nods to organizational heritage throughout the office. The furniture was designed and selected by Ai Corporate Interiors.

LINKS TO CONTENT FROM NEW ACADEMY OF COUNTRY MUSIC HEADQUARTERS:

Founded in Southern California in 1964 as a regional trade organization, the ACADEMY OF COUNTRY MUSIC (ACM) has grown in the almost-60 years since into a leading association for the Country Music industry. Today, the Academy boasts more than 4,900 professional members nationwide and serves as a powerhouse advocate for Country fans, artists, and all facets of the business, as well as a supporter of philanthropic work through charitable partner ACM LIFTING LIVES, which harnesses the power of the Country Music community to help improve lives through the power of music and provide aid in times of need, with a focus on health initiatives. 2022 continues to be a landmark year for the Academy, with the relocation of the organization’s headquarters to Nashville after decades in Los Angeles; ACM Honors, dubbed the “Country Music industry’s favorite night,” returning to broadcast TV and airing for the first time on FOX; and, in a historic partnership with Amazon, its iconic Academy of Country Music Awards streamed live on Prime Video in 235 territories all over the globe, the first time a major awards show has streamed exclusively. For more information, log onto www.ACMcountry.comor www.ACMLiftingLives.org.