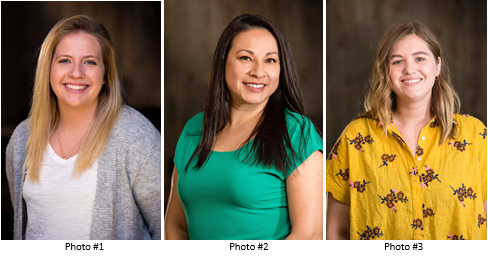 Encino, CA (February 14, 2020) – The Academy of Country Music® is announcing a promotion within the Events department and two new additions to join the Academy staff. Danielle Bardier has been promoted to Coordinator, Events; Gloria Chavez has joined the staff as Assistant, Finance & Operations; and Hannah Kellis has joined the staff as Assistant, Creative & Content Production. All positions are based out of the Academy’s office in Encino, CA.

Born and raised in Douglas, Massachusetts, Danielle Bardier joined the Academy of Country Music in the beginning of 2019 as Assistant, Events and has most recently been promoted to Coordinator, Events. In her new role, Bardier will continue to work on several facets of the ACM Awards, ACM Party for a Cause events and ACM Honors. Bardier graduated from the University of Southern California where she received a degree in Business Administration with a focus on Marketing. During her time at USC, Bardier interned for the Academy of Country Music in the events department and served as a production assistant following her 2017 graduation. Since graduating, Bardier moved back to Mass, where she worked as a sponsorship and event coordinator at Harpoon Brewery and helped to produce several of Harpoon’s charitable events. When an ACM position opened in 2019, she returned to Los Angeles. Bardier reports to Erick Long, Senior Vice President, Events and can be reached here.

Gloria Chavez joins the Academy of Country Music as Assistant, Finance & Operations. A Los Angeles native, Chavez has an extensive background in accounting and finance with a diverse work experience in both the mortgage banking industry as well as property management. She applies the same passion towards her work life as she does in her personal, volunteering for organizations such as Habitat for Humanities and recreation park youth mentoring, while obtaining her Bachelor of Science degree from the University of Phoenix. Chavez is also an accomplished hiker and takes advantage of the California sun and beautiful landscapes. In her role as Assistant, Finance & Operations, Chavez will help oversee all aspects of general office and building operations as well as act as office receptionist.  She will also work alongside vendors to ensure the upkeep of both the office and building maintenance, including managing office inventory, all technological system processes and assisting in the finance department with various projects. She reports to Alexa Fasheh, Vice President of Finance & Operations and can be reached here.

Hannah Kellis joins the Academy of Country Music as Assistant, Creative & Content Production. Originally from Maine, Kellis graduated from Pepperdine University in Malibu where she studied Media Production. Upon graduating, she interned with companies such as A Rocha USA and Therapy Studios, where she assisted with both production and post-production. She then began to work at Vendetta/Apartment 3B Productions, where she handled script coverage and event preparation. In her new position at the Academy, Hannah will oversee administrative tasks and other projects for the Creative & Content department. She reports to Lisa Lee, Senior Vice President, Creative & Content Production and can be reached here.

Photo credit: Courtesy of the Academy of Country Music